She Gets the Laughs 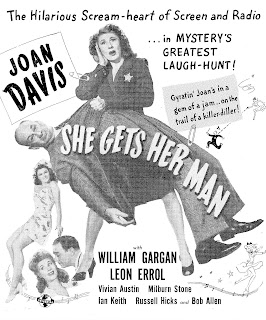 For my money, She Gets Her Man, released by Universal in 1945, is Joan Davis' best comedy feature. There are laughs aplenty, and scarcely a dull moment, in its 72-minute running time.

Joan is cast as Jane Pilkington, daughter of the late "Ma" Pilkington, former police chief of a small town, Clayton. The town is in an uproar thanks to a blowgun-wielding serial killer who attacks local citizens with poison darts. Since her mother was a top-notch crimefighter, Jane is just the gal to restore law and order in Clayton, right? Well...

She Gets Her Man is a terrific showcase for Joan's finely honed comedic skills and impeccable timing. It's not an A-list film comedy with an all-star cast and a generous budget -- Joan never got those -- but I'd be surprised if most viewers didn't get at least a few chuckles from it. I certainly did. The reviewer for Box Office Digest concurred, saying, "Joan Davis comes into her own ... The laughs are consistently present and plenteous."

One prominent comedian who didn't find the film amusing was Harold Lloyd, who after taking a good look promptly contacted his lawyer. For that story, as well as an in-depth look at its star's life and career, check out Joan Davis: America's Queen of Film, Radio and Television Comedy.
Posted by David C. Tucker at 11:18 AM No comments:

Email ThisBlogThis!Share to TwitterShare to FacebookShare to Pinterest
Labels: comediennes, Joan Davis, She Gets Her Man

"Soap" in Your Eyes

I've rarely watched Soap since its original 1977-81 run on ABC, but A.S. Berman's Soap: The Inside Story of the Sitcom That Broke All the Rules (BearManor Media) does an excellent job of reminding me why I liked this quirky, innovative show so much. 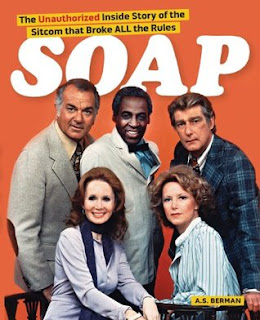 Highly controversial in its day, Soap could be not only hysterically funny but surprisingly touching, and had a thoroughbred cast brimming with stage-trained actors. Behind it all was creator Susan Harris, one of the most distinctive voices in television comedy.

Berman's book is impressively researched, drawing on substantive interviews with cast and crew members. His critique of the show candidly addresses its flaws, but also celebrates what it did best, while acknowledging the talent and drive that went into its creation. And the detailed episode guide will have you chuckling as you recall some of the show's best moments.

Soap is a show that well deserves a book-length tribute and assessment. A.S. Berman has delivered it.
Posted by David C. Tucker at 10:02 AM 1 comment:

In the mid-1960s, Eve Arden was back at home in her native California after a family vacation in Rome and London that lasted more than a year. She was ready to get into the swing of being a working actress again, seeing what opportunities were out there in stage, film, and television. In March 1966, that included a guest appearance on NBC's Run for Your Life, which starred Ben Gazzara as a lawyer who goes on the road to experience life to the fullest after being told he's terminally ill.
Eve was cast as a character the Los Angeles Times' Charles Champlin described as "a gay mother, living it up on the Riviera, complete with Frug-Watusi session," with actress Davey Davison as her shy daughter. Also appearing in the episode was actor-singer Bobby Darin, with whom Eve shared a lively dance sequence. The role was a bit out of the ordinary for Eve, and that's what she liked about it. "It's terrible to be thought of as just a type. I'd rather play a well-developed role -- a mother, not just Joan Crawford's best friend."

Soon, a more prominent television role would come her way, when old friend Desi Arnaz approached her about coming back in a weekly series. The result was her two-year run opposite Kaye Ballard in The Mothers-in-Law. In her late fifties, Eve was still in demand, as she would be for years to come. For more on a career that lasted nearly a lifetime, check out Eve Arden: A Chronicle of All Film, Television, Radio and Stage Performances.
Posted by David C. Tucker at 8:02 AM No comments:

Email ThisBlogThis!Share to TwitterShare to FacebookShare to Pinterest
Labels: actresses, Eve Arden, Run for Your Life, The Mothers-in-Law 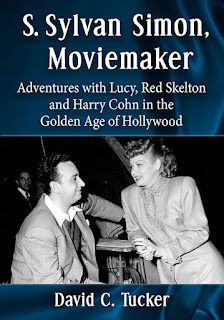 Here's the just-released cover art (and complete title) for my ninth book, coming this fall from McFarland and Company. What's it all about? Read on:

He was Red Skelton’s favorite director, and mentored Lucille Ball in the art of physical comedy. In his 15-year Hollywood career, S. Sylvan Simon (1910-1951) directed and/or produced more than 40 films, with stars like Lana Turner, Abbott and Costello, and Wallace Beery. Though he loved to make moviegoers laugh, he demonstrated his versatility with murder mysteries, war stories, and musicals. After a decade at MGM, he moved to Columbia, where he produced his own projects, including the Western melodrama Lust for Gold, and popular slapstick comedies like The Fuller Brush Girl. As head of production, reporting to irascible Harry Cohn, he produced the award-winning Born Yesterday, and was working on From Here to Eternity when his life ended tragically at the age of 41.

This first-ever account of Simon’s life and career draws on interviews with family and colleagues, genealogical records, archival materials, and his own annotated scripts to tell the story of a stage-struck boy from Pittsburgh whose talent and tenacity made him a Hollywood success. The filmography provides production histories, critical commentary, and excerpts from published reviews. An appendix covers books written or edited by Simon, including his anthologized plays for amateur groups.

So there you have it. I hope you'll give it a look when it's published later this year.
Posted by David C. Tucker at 6:40 AM No comments:

C is for Cullen

Given the "new normal" that's come to pass in recent months, most of us are probably watching a little more TV than we used to. Around my house, we've recently discovered the vintage game show Blockbusters, which aired on NBC's daytime schedule from 1980 to 1982. Visit YouTube if you want to see some episodes. 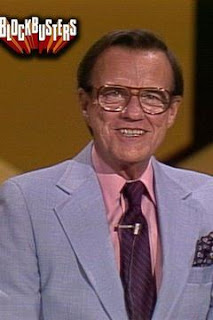 This Goodson-Todman production revolves around a giant game board consisting of linked hexagons. Competing players try to win spots on the board by being first to answer an array of quiz questions, ranging from pop culture to world history, knowing only that the correct response begins with a certain letter of the alphabet. Overseeing the proceedings is the man commonly described as TV's best-ever game show emcee, affable and witty Bill Cullen.

One of the mysteries surrounding this engaging game is why it wasn't a bigger hit, running less than two years. For answers, I turned to a book I'd been meaning to read for awhile anyway, Adam Nedeff's Quizmaster: The Life and Times and Fun and Games of Bill Cullen (BearManor Media). It offers a satisfying chapter on this show's history in particular, as well as a thoroughly researched and highly readable account of Cullen's life. If you like a dose of tragedy in your biographies, this probably isn't the book for you. Despite a childhood bout with polio that left him with a permanent limp, Cullen was a happy man, doing what he loved and more than satisfied with his lot in life. Interviews with the star's fans and colleagues help elucidate just what he did that made him so good at a job many would have thought any smiling guy in a nice suit could do.

So at least my TV watching is leading to more reading. That's a good thing, right? Except for maybe a little eye strain.
Posted by David C. Tucker at 8:29 AM No comments: 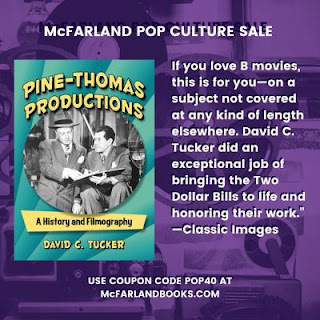 Big sale on all McFarland Pop Culture titles ends Sunday -- don't miss out!
Posted by David C. Tucker at 9:37 AM No comments: 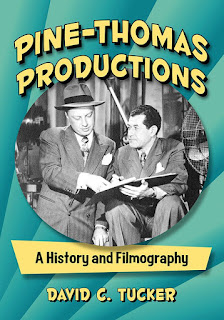 I'm pleased by the warm response given by two early reviewers of Pine-Thomas Productions: A History and Filmography. First up was Booklist, published by the American Library Association, which called it "a treat for serious film buffs and students." Not far behind was the January issue of Classic Images, saying, "If you love B movies, this is for you ... David C. Tucker did an exceptional job of bringing the Two Dollar Bills to life and honoring their work."

If you're interested in meeting a fascinating bunch of characters -- on both sides of the screen -- I hope you'll give it a look.