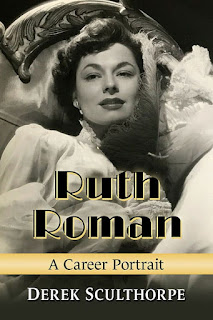 In the past few years, author Derek Sculthorpe has become the film noir fan's best friend, with his well-researched books on the likes of Edmond O'Brien, Sydney Greenstreet, and Claire Trevor. He scores again with his newest, Ruth Roman: A Career Portrait (McFarland), which shines an overdue spotlight on the talented beauty who graced the likes of The Window (1949), Lightning Strikes Twice (1951), and Hitchcock's Strangers on a Train (1951).

One of the few Golden Age actors who appeared in movies under her real name, Miss Roman originally pursued an acting career in New York City, with little success. In 1943, she relocated to Hollywood with a $100 bankroll. Not exactly an overnight success, she spent much of the next several years stuck in minor roles. But as the 1940s gave way to a new decade, her career was finally on the upswing, with an attention-getting role in Champion (1949). She was signed to a contract by Warner Brothers and given the star buildup. Though her sultry sensuality won her many fans, she fell short of becoming a major star. However, as Sculthorpe's text makes clear, Miss Roman's lengthy career in film and television amply merits a book-length study, and this is a fine one.
In the 1950s and 1960s, Miss Roman increasingly found steadier work in television. A series regular in The Long, Hot Summer (ABC, 1965-66), she also made numerous guest appearances on popular shows of that era. I was unaware of just how many classic series featured her as a guest star. Late in her career, she had recurring roles in Knots Landing and Murder, She Wrote.

Subtitled "A Career Portrait," the book's main emphasis is indeed on the actress' professional life. However, it is substantially enriched by the participation of Hollywood agent Budd Burton Moss, Miss Roman's third husband, still with us in his nineties. He gives a poignant explanation of how their marriage went awry, at a time when she felt he was making great deals for many of his clients, but not her. There's also an intriguing account of her experiences as one of the survivors of the S.S. Andrea Doria's tragic 1956 shipwreck.

Like many of the best film books, this will leave you wanting to watch more of its subject's work. Film fans will appreciate the care and attention Derek Sculthorpe has given to an underappreciated actress who's well worth rediscovering.

NOTE: I was provided a free copy of this book in exchange for an honest review.

Here it is! The beautiful cover of my forthcoming book, Rochelle Hudson: A Biography and Career Record, due out later this year:

You can read more about it here.
Posted by David C. Tucker at 10:54 AM No comments:

I've been an admirer of character actress Lee Patrick since the 1970s, when I first saw her play the comically confused Henrietta Topper in syndicated reruns of the 1953-55 sitcom Topper. Movie buffs remember her memorable supporting performances in classics like Mildred Pierce (1945) and, of course, The Maltese Falcon (1941). 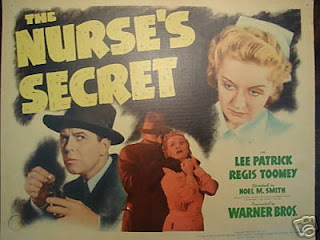 Today I enjoyed watching The Nurse's Secret, a 1941 B movie in which she plays a rare starring role. It's adapted from mystery writer Mary Roberts Rinehart's 1932 book Miss Pinkerton: Adventures of a Nurse-Detective. Miss Patrick plays heroic nurse Ruth Adams, who with her policeman boyfriend Inspector Patton investigates the death of a young playboy. She makes her character capable, sassy, and just a bit of a smart aleck.

Just over an hour long, the film is entertaining without being terribly memorable. A good cast includes Clara Blandick (Auntie Em in The Wizard of Oz), and Regis Toomey as Patton. It's a remake of 1932's Miss Pinkerton, which starred Joan Blondell as Nurse Adams.

Perhaps someday I'll write a book about Miss Patrick. She certainly deserves one.

At first glance, you might think you'd misread the title of author Derek Sculthorpe's latest, Malcolm Scott: The Woman Who Knows (BearManor Media). Delving once again into British entertainment history of the late 19th and early 20th century, Sculthorpe offers what he describes as a "portrait of a unique music hall artiste." 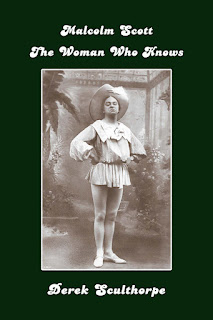 In his day, Malcolm Scott was a highly successful female impersonator, who specialized in comic renditions featuring well-known personalities such as Katherine Parr, Henry VIII's last wife. Developing his own unique and acclaimed style, Scott influenced a host of performers who followed him; the author sees a certain kinship with Barry Humphries' Dame Edna. Though there is very little of Scott's work that can be seen or heard today, Sculthorpe is nonetheless successful in giving us a feel for the flavor of his comedy. He also manages to portray Scott the man and his private life, reporting the facts he skillfully uncovered but occasionally allowing us to intuit a bit more than can be definitively stated. The book offers an exhaustively researched list of professional credits.

Some readers and biographers firmly believe that a worthy book cannot be written about someone who has been dead for many years, with no survivors who can contribute to the work. Here, as in his previous writings about music hall artists, Derek Sculthorpe triumphantly proves them wrong, and in doing so makes a strong contribution to performance history that deserves to be preserved.

NOTE: I was furnished with a free copy of this book in exchange for an honest review. 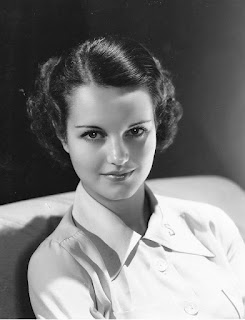 I'm very happy to report that I have submitted the completed manuscript for my book on Rochelle Hudson, which should be published by McFarland this year or early next year. (You can safely bet I'll keep you posted!)

Now perhaps I can be a little more of an active blogger here. I've received a couple of interesting books that I look forward to reviewing soon. Other than that, I might just be lazier than usual for a bit. Thanks for your support. 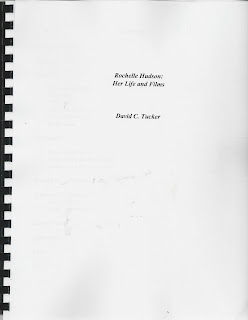 Once a first draft is on paper, next comes is one of my favorite parts of writing a book -- proofreading and editing.

The preceding paragraph was a complete lie.

But I am plugging away nonetheless, doing my best to deliver the most polished and accurate manuscript possible. Hope you'll see the results in the new year. 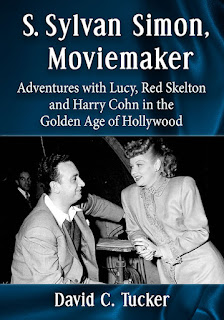 Stephen Michael Shearer, author of acclaimed biographies of Hedy Lamarr and Patricia Neal, among others, recently reviewed S. Sylvan Simon, Moviemaker in his column, The Film Biographer. Here's what he had to say:
"The name of film director/producer S. Sylvan Simon is largely forgotten today for reasons which are misunderstood. Except for his last film which he produced, Born Yesterday (which won Judy Holliday a Best Actress Oscar), Simon who died in 1951, has slipped into the netherworld of forgotten film directors. And this is highly unfair, as brought out in fine detail by author David C. Tucker’s wonderfully researched biography S. SYLVAN SIMON, MOVIEMAKER: ADVENTURES WITH LUCY, RED SKELTON AND HARRY COHN IN THE GOLDEN AGE OF HOLLYWOOD.
S. Sylvan Simon began his career as a young man acting and directing in theatre. Born in 1910, he was an overachiever, and perhaps sensed early in life he would die young. By his mid-20s he was working at MGM directing first film shorts and graduating to decidedly “B” pictures including three gems with upcoming actress Lana Turner – These Glamour Girls (1939), Dancing Co-Ed (1939), and Two Girls on Broadway (1940). Assigned to films starring most of MGM’s leading character actors and second leads – Robert Young, Ann Sothern, Marjorie Main, Ann Rutherford, Wallace Beery, Frank Morgan, etc. – these minor films were highly successful and fed the coffers at Metro.
With his three popular Red Skelton pictures - Whistling in the Dark (1941), Whistling in Dixie (1942), and Whistling in Brooklyn (1943) - along with a couple of Abbott and Costello (on loan to MGM) hits Rio Rita (1942) and Abbott and Costello in Hollywood (1945), S. Sylvan Simon was considered one of the most competent and efficient directors at the studio. His films always turned profits. Signing with Columbia Pictures, Sylvan directed two more very profitable comedies with Red Skelton – The Fuller Brush Man and A Southern Yankee (both in 1948) - plus three hits starring Lucille Ball – Her Husband’s Affairs (1947) which he directed, and Miss Grant Takes Richmond (1949), and The Fuller Brush Girl (1950) - both of which he produced.
By the time he produced Born Yesterday (George Cukor directed), Simon was Vice-President in Charge of Production at Columbia Studios. He had successfully produced Lust for Gold in 1949 starring Glenn Ford and Ida Lupino and was in preparation to start From Here to Eternity when he suffered a fatal heart attack in 1951. He was just 41 years old.
So “Bravo!” to David C. Tucker for giving us S. SYLVAN SIMON, MOVIEMAKER: ADVENTURES WITH LUCY, RED SKELTON AND HARRY COHN IN THE GOLDEN AGE OF HOLLYWOOD. Each film of the director/producer is detailed in the book with fascinating and well-researched back stories. A loving tribute to a fine director...and highly recommended."
Many thanks, Stephen!
Posted by David C. Tucker at 8:55 AM No comments: